The Mom Test – how to uncover useful insights

Talking with your target audience is essential for any innovator. However, interviewing people isn’t easy. People tend to lie when you ask them what they think about your solution. This is something you should be wary of. But if you are prepared, you can use seemingly simple chit-chat to uncover useful insights. The Mom Test offers some simple rules to help you extract meaningful information from anyone you speak to.

Imagine, you’ve come up with a brilliant solution to an annoying problem. You know it’s of the utmost importance to involve your target audience, so you’ve set up some interviews with people who represent this group. After all, it’s the people who experience the problem who will know best what’s needed to improve the situation.

Speaking with these people is a magnificent idea. However, there is a problem: people lie. Most people won’t tell you the entire truth, although they might not be aware of their deceit. There are several reasons why people lie. For starters, people are inclined to portray themselves in a somewhat more favourable light than might be called for. They’ll want to prove how hard-working, open-minded and friendly they are. Therefore, they’ll be tempted to paint you a slightly prettier picture than would be justified. There is a bigger problem, however: people want to be liked. So when you share your idea with them, they’ll try to be supportive to avoid hurting your feelings.

Rob Fitzpatrick wrote a book about this problem, called ‘The Mom Test’. The title is a reference to the fact that you should never ask your mother if she likes your business idea. After all, it’s all too likely that she’ll lie and tells you it’s a great idea. That’s what most mothers are like: they don’t want to hurt their kids’ feelings. Fitzpatrick goes a step further though; not only is it unwise to ask your mom this question, it’s foolish to ask anyone a question like ‘Do you think this is a good idea?’ To extract useful information you’ll have to do better than that.

Fitzpatrick describes how you can uncover more meaningful information by asking good questions. Even when everyone lies to you.

The video below perfectly illustrates the subtle difference between a valuable and a worthless customer conversation:

The three rules of The Mom Test

The ‘Mom Test’ consists of several simple rules to help you ask better questions. Use these rules to guide your conversation and you’ll quickly uncover useful customer insights.

The three rules of The Mom Test are:

The idea behind these rules is that you’ll need to uncover data and insights about the behaviour of your target audience. Unlike opinions, these are useful bits of information. Whatever you do during the conversation, try not to mention your idea. This way, you won’t accidentally tempt the other to tell you white lies. Also avoid asking questions about the future like “Would you use this?” Hypothetical questions like these often lead to vague opinions or promises about the future. Hardly trustworthy. Instead, ask about examples from the past with questions like “Could you give me an example of a situation when you did that?”

Some things to keep in mind

Following the three rules above is a great start. However, guiding a great user interview is more complicated than that. Here are some bits of advice:

Disguise your questions so your interaction looks less like an interview and more like a normal conversation. Embed your key questions carefully in a casual conversation to ensure you’ll get honest responses.

Once they inevitably learn about your idea, most of the people you’ll speak to will have feature requests. Don’t blindly accept these ‘improvements’. It’s tempting for people to share feature requests, as it makes them feel useful. A mere suggestion for another feature isn’t extremely useful. What is useful, is uncovering the need behind it. This is why you should always dig deeper when you hear a feature request. Ask questions like:

– Why would you want that?

– What would that let you do?

– How are you coping without it?

Make sure you’ll ask at least one question that terrifies you. The type of question that could lead to an answer that proves your idea is based on faulty assumptions. Granted, it’s scary to ask a question like that, but wouldn’t you rather uncover this information before you invest a lot of time and money?

Would you like to read more about uncovering valuable insights when talking to your target audience? Read The Mom Test. 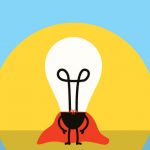 Creativity during a crisis – the quest for a creative solution, Part 2Problem solving