The 5 Whys – identifying the root cause of your problem

Looking for a solution to your problem? Start with a quick root cause analysis. With the 5 Whys technique, you’ll uncover what’s causing your misery.

Not quite understanding the origin of your problem will mess with your problem-solving process. If you don’t properly analyse your problem, there is a good chance you’ll be fighting a symptom, instead of getting closer to an actual solution. Many times what seems to be the problem is not what actually needs to be solved. Often there is a deeper problem that needs to be eliminated first.

This is why a root-cause analysis is essential to any problem-solving endeavour. And this doesn’t have to be complicated. Often a few clever ‘why’ questions are enough to uncover the cause of your trouble.

The 5 Whys technique is developed by Japanese inventor Sakichi Toyoda. Having proven its worth in the Toyota factories, the method is now widely used within Kaizen, Lean Manufacturing and Six Sigma.

The idea behind the technique is simple; if you ask ‘why’ five times, the root cause of your problem or defect will become clear. Using the technique will enable you to peel away layers of distracting symptoms to quickly detect the real causes of a problem. This allows you to eliminate the root of your problem, instead of merely fighting the symptoms.

Step 1. Assemble the right team
To properly utilise the 5 Whys technique, it is important to gather a group of people who are familiar with the details considering the problem. This is important as the outcome of the technique strongly depends upon the knowledge of the people involved.

Step 3. Ask the first ‘why’ question
Ask the team why the problem occurs. Make it very clear to the group that only facts should be mentioned (this is why you need people who know a lot about the facts surrounding the problem). Steer clear of assumptions and hypotheses. Write down the answer. Sometimes more than one cause will be presented by the group. In that case, write down all causes and repeat the following steps for each listed cause individually.

Step 4. Ask four more ‘why’ questions
Use the answer to formulate a second question and repeat this procedure until you can’t answer the question anymore. Each answer forms the basis of the next question.

Sometimes it will take more (or fewer) why-questions, but often 5 why-questions will give you a good view of what’s causing your troubles.

How to keep a monument from crumbling

A classic 5 Whys example is the analysis of the crumbling Jefferson Memorial.

Park rangers noticed that the stone of the Jefferson Memorial was deteriorating, but they weren’t sure why this was happening. So they asked themselves the question

Why is the stone deteriorating?
Answer: Because it is cleaned intensively (with high-powered sprayers) every two weeks.

The park rangers figured that with that answer, they understood the problem. The many birds that fly around the monument were clearly the problem. And so the rangers put up nets to keep the birds away.

However, this wasn’t a very elegant solution. The nets around the monument were not exactly improving the aesthetics of the building. And even worse; many birds found their way around the nets and got in anyway!

The rangers decided to dig a little deeper.

Why are there so many birds around the monument?
Answer: Because there is a lot of food for the birds (many spiders live in the monument)

Why are there so many spiders in the monument?
Answer: They are feeding on the many insects that fly around the monument

Why are there so many insects flying around the monument?
The insects are attracted to the spotlights that are turned on in the evening to illuminate the monument at night.

This analysis led the park service to a breathtakingly simple solution: they simply delayed the daily lighting of the structure to one hour after sunset. This simple act led to 90% fewer insects around the monument and effectively broke the problematic food chain. As a result, the building didn’t need nearly as much cleaning anymore.

The example of the crumbling Jefferson Memorial perfectly illustrates how 5 simple ‘why’ questions are enough to uncover the root cause of a seemingly tricky problem.

Imagine what would happen if the rangers in this example would’ve rushed into problem-solving mode, without properly analysing the situation, They probably would’ve tried to find alternative (and possibly more expensive) cleaning methods, while the cause of the problem would remain unchanged. At the same time, the example above clearly shows that not asking enough ‘why’ questions is equally problematic. If you stop asking your ‘why’ questions prematurely, you might still be solving a (slightly deeper lying) symptom of the real problem.

Let me end with a note of caution. While the 5 Whys method is a brilliant problem-analysis tool, sometimes a problem is too complex to analyse with 5 simple questions.

You’ll recognise problems that are unfit for the 5 Whys method when you can’t easily answer the first ‘why’ question with a single answer. Some problems have many potential causes and simply need a more elaborate analysis (remember: assumptions are not allowed).

Don’t dismiss the 5 Whys technique too easily though. In most cases the 5 Whys method will give you a better understanding of the challenge, thus putting you in a better position to solve it.

What five ‘why’ questions can you ask about your problem?

René de Ruijter
René is one of the founders of HatRabbits. His background in both law and photography enables him to shift smoothly between very different worlds and might explain his fascination with unusual combinations.
Recommended Posts
Comments 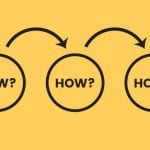